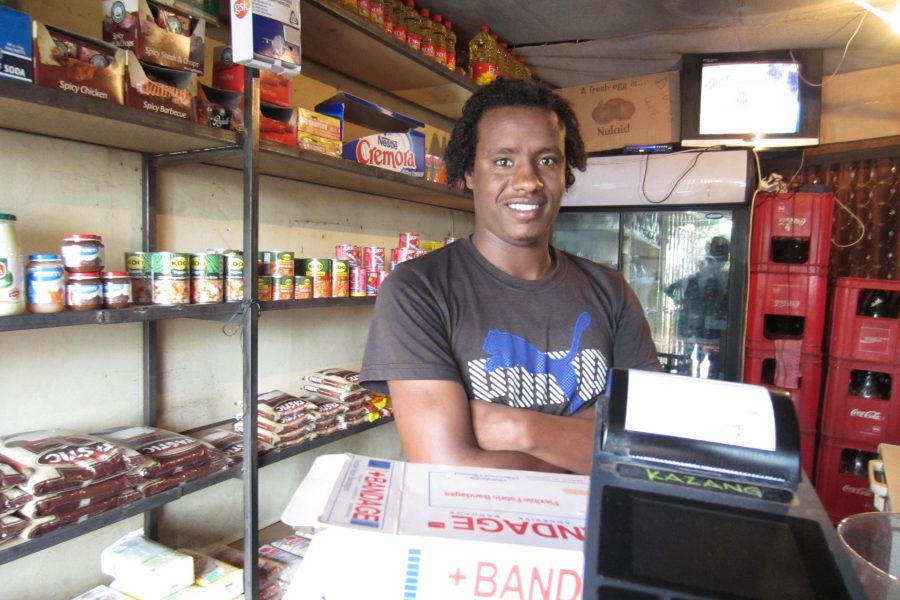 Meet David – he lives and works in a small spaza shop attached to a home in an informal settlement north of Johannesburg. David’s doing whatever it takes to survive – just as his parents and grandparents did. He’s an entrepreneur out of necessity; selling everyday household items like groceries and cosmetics as well as prepaid services such as airtime, data, electricity, money transfers and lottery tickets. To differentiate himself, he also offers arcade games to local youth.

He’s one of thousands of micro-entrepreneurs that make up South Africa’s informal economy.

While David doesn’t make a hefty turnover each month, he’s created an economic opportunity that services his community and keeps his family afloat. And while most transactions don’t exceed R50, it’s these rands and cents from the millions of consumers who support informal traders that make a substantial impact on the country’s GDP. Depending on how you calculate it, the informal sector is estimated to contribute anything between 7% and 13% to the total South African economy.

This is not surprising if you consider the 2010 research by Finmark Trust which indicated then that there were around six million small businesses in South Africa, with the majority of them being informal.

Although David has a point-of-sale terminal in his store, most of his customers pay for their goods or services in cash. According the Finscope 2016 report, only 77% of South Africa’s adult population are banked either formally or informally; leaving 23% financially unserved and who rely solely on cash for their day-to-day living.

In developing economies, there is talk that micro-payments are not a viable business option. But this is with reference to online digital payments for small items like a news story or song. Research by BI Intelligence released in January 2017 reports that for merchants, micro-payments are often too expensive to offer. In a nutshell, the The Micropayments Report: Problems and solutions for low-value payments, says: “The fees associated with card-based transactions are often high enough that they pare down or eliminate almost all potential for seller profit from micropayment transactions.” It argues that without a major brand, like Apple or Facebook, offering an integrated and seamless payment infrastructure, it is unlikely that merchants or consumers will support micro-purchase transactions on behalf of publishers.

But in the cash-dominant informal sector in countries like South Africa, micro-vending is what keeps the economy buoyant. Kazang, the provider of micro-vending technology has just over 15 000 active terminals in South Africa which process in excess of R2.5 billion of transactions per year.

Foshizi, a research company specialising in mass market research, believes that about 30 to 40% of retail spending is unbanked and Lebo Motshegoa, MD of the business says that by not catering to the needs of those who earn and spend cash, businesses might be missing out on the consumer spend of millions of people.

So in a dual-economy country like South Africa, where cash remains a major part of many consumers’ daily lives, small transactions and micro-payments are really the only business model.

Where to find us